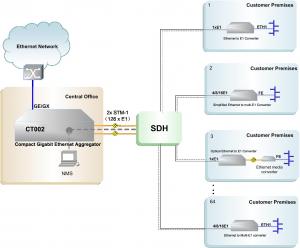 CT002 is a Gigabit Ethernet Aggregator with inverse multiplexing and VLAN TAG function; it provides three gigabit Ethernet interfaces (2 electrical and 1 optical Ethernet interfaces) compliant with IEEE 802.3 series standard and 2 STM-1 interfaces. It can separate the Ethernet data from GE port (the carried VLAN Tag correspond to different VCG channels), encapsulate them into EoPDH signal, and then into SDH signal; in the opposite direction, it can de-map the Ethernet data from E1 signal, then from SDH signal, aggregate them into GE port. Thus, it can achieve the efficient transmission of Ethernet data over SDH network.
CT002 is designed as a modular system, with one 16VCG Ethernet aggregation unit embedded in the mainboard, three 16 VCG Ethernet aggregation units pluggable, and various optional power cards to meet the various application requirements.
CT002 supports 64 VCG channels (each module supports 16 channels) at most, and each VCG channel can be configured to work in single E1 mode or Multi-E1 conversion mode independently, In single E1 conversion mode, each channel bandwidth is one E1; In multi-E1 conversion mode, the maximum bandwidth of each channel is 16 E1, under 1+0 mode (when the two STM-1 interfaces are independent), the 64 VCG share 126 E1.
CT002 can be used in the traffic convergent network, supports point-to-multipoint application; it supports NE management based on simple CLI command via RS232 type; meanwhile, it supports SNMP_V1 and SNMP_V2 protocol, supports network management platform CCView based on C/S architecture, which is easy for device configuration, management and maintenance.
With EoPDH (Ethernet over PDH) technology compliant to ITU-T G.7041, G.7042, G.7043 and G.8040 standards, CT002 can communicate with products from other vendors adopting the same standards.

Compact design with 1U height, 19 inch, 255mm depth, and can be installed on standard rack

Supports hot-spare power, the power consumption is less than 20W

Thank you! Your message has been sent to the following suppliers.